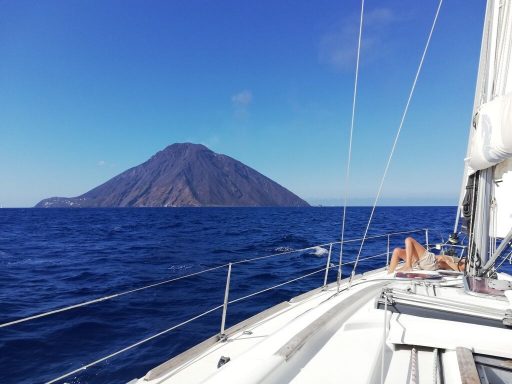 Vulcano will impress you with a vivid image of ​​how a crater is formed; Lipari, known for its testimonies of ancient baths and the inevitable pumice; Salina, a green pearl in the deep south; Panarea, the most fashionable, but which reserves pleasant surprises moving away from the inhabited center; Filicudi, the wildest, surpassed only by Alicudi; And finally the most fascinating Stromboli: A lighthouse in the Mediterranean. The visit and the excursion to the top of the mountain alone will be enough to repay you for this journey … walking in the dark hearing the roar of the volcano and admiring the “shots” of Stromboli under a sky full of stars … these will be just some of the many sensations you will experience.

Let’s not forget the baths in the hot mud-pools in Vulcano, the isolation of Ginostra, the scents of the Mediterranean scrub with broom, thyme, cistus, capers, and malvasia; The natural environments that change constantly: From black of the lava to the green of the olive trees, the eucalyptus trees … in short, everything that can awaken one’s senses making us fall in love forever with this nearby corner of paradise.

Join a group of like-minded individuals led by an experienced environmental excursion guide; come onboard a yacht navigated by sn accomplished skipper, knowing all the secrets of the Aeolian sea.

The added values ​​of this holiday: The strong contrasts between water, wind, earth and fire; The flavors of real, strongly Sicilian foods, the crystalline sea, the scents and colors of the maqui flowers, the sympathy of the team… and the personal suggestions that as such will remain… UNIQUE!